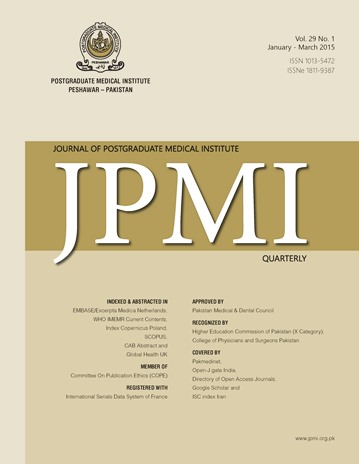 Objective: The objective of the study was to review our experience in themanagement of splenic abscess in cancer patients at a cancer hospital in Pakistan.

Methodology: This study was conducted at Shaukat Khanum Memorial CancerHospital and Research Centre, Lahore and data reviewed from January 2007 till December 2012. Demographic, pathologic, radiologic and treatmentrecords of each cancer patient with splenic abscess were retrieved from theelectronic database. Patients were followed for a period of six months.

Results: Twelve patients were diagnosed with splenic abscess in the last sixyears. Males were ten compared to two female patients. Mean age was 41.1years (range 3-64). All except one were adults. Six patients had hematologicalmalignancies while six were diagnosed with solid organ tumors, amongthe solid organ tumors three had metastatic disease with unknown primary.Six patients had multiple splenic abscesses while six patients had solitary abscesses.Bacterial cultures were positive in four patients, Pseudomonas speciesand Escherichia coli in two patients each; one patient with mycobacteriatuberculosis; no fungal growth identified in any patient.Antibiotics were given to all patients except one patient who died before anytherapy due to end stage hepatocellular carcinoma. Three patients were treatedwith antituberculous therapy, two of them recovered while one was lost tofollow-up.Percutaneous aspiration/drainage (PCD) was done in five patients; Surgerywas performed in three patients. One patient who underwent PCD died dueto septicemia while one patient died of cardiac event, two patients were lostto follow up while eight patients recovered completely.

Conclusion: Percutaneous aspiration/drainage is an equally good option fortreating splenic abscess as compared to surgery along with adequate antibiotics.