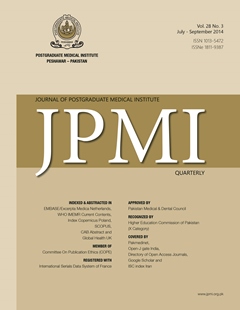 A 26 years old unbooked lady, G6P5, presented to labour room of Depart­ment of Obstetrics and Gynaecology, Lady Reading Hospital Peshawar with 31 weeks pregnancy and preterm labor. Patient was pale looking with BMI of 20kg/m2. Her blood pressure, pulse rate, temperature and respiratory rate were normal, systemic examination revealed normal findings, Symphysiofun­dal height was 36cm, baby was lying longitudinally, cephalic, liquor was in­creased and fetal heart were not audible. She had not done any blood or urine investigations throughout her pregnancy, the only time she visited a doctor was for an ultrasound which showed that baby is having meningocele. She delivered a dead baby of 2kg with meningocele, Delivery of baby was followed by delivery of a large, ovoid firm mass with lobulated smooth sur­face, the time interval between delivery of baby and mass was 4 minutes, five minutes later placenta was delivered. On examination placenta was complete. The other mass was grayish brown, nodular measuring 16í—12í—10cm. Its cut surfaces showed grayish white and grayish brown multiloculated areas. Microscopic examination showed multiple fragments of necrotic poorly fixed tumor having morphology of an immature (malignant) Teratoma. Prominent immature neoplastic neuroepithelial elements with true and pseudorossette formation were seen mixed with other mature and immature ectodermal and mesodermal origin tissue. No placental tissue was seen. It was grade III im­mature malignant placental teratoma. The major differential diagnosis is fetus acardius amorphus. This reported case is first of its kind, till date all previously reported cases were of benign mature placental teratoma.