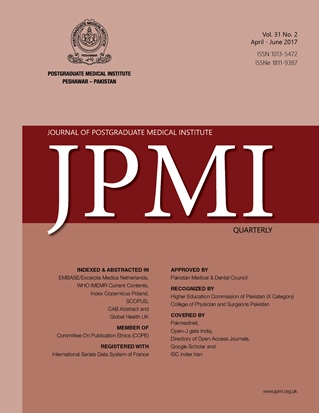 Objective: To determine the frequency of accuracy of oxygen prescription in a
teaching hospital of Khyber Pakhtunkhwa.
Methodology: This was a hospital based descriptive study performed in Lady
Reading Hospital, Peshawar, Khyber Pakhtunkhwa, in May and June 2015. The
study sample included a total of 110 admitted patients of either gender and
of any age in various units (Medical and allied, Surgical and allied, Gynae/Obstetrics
and Paediatrics), who were on oxygen therapy and the oxygen was prescribed
on treatment charts. Data was collected regarding oxygen prescription,
administration and monitoring. Accuracy of oxygen prescription was determined.
Descriptive statistical analysis was employed utilizing SPSS version 21.0.
Results: Of the 110 in-patients who were on oxygen therapy, 52 (47.3%) were
males and 58 (52.7%) were females. Source of Oxygen (as centralized supply
or oxygen cylinders) was not mentioned in 89 (80.9%) patients. Face mask was
used for administration of oxygen in 95 (86.4%) of patients. Method of oxygen
administration was not mentioned in 90.0% patients, duration of therapy not
mentioned in 86.4%, oxygen flow rate not mentioned in 83.6% and signature of
doctor or prescriber not found in 81.8% patients. Only 17 (15.5%) prescriptions
stated all the required parameters and were considered as accurate.
Conclusion: Accuracy of oxygen prescriptions based on required parameters
were found only in a minority of prescriptions. Most frequent deficiency in oxygen
prescriptions was lack of mention of FiO2 followed by method of oxygen
administration, oxygen flow rate and signature of doctor or prescriber. Face
mask was the most frequent device for administration of oxygen.