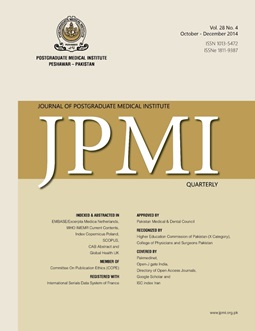 Objective: To determine and compare the level of awareness regarding diabetes mellitus, its complications and management in male & female diabetic patients of Peshawar, Pakistan.

Methodology: A cross sectional study conducted in Peshawar, from Februaryto July 2013. A well organized questionnaire was used, having fourteen items.The participants were interviewed and the questionnaire was filled by trainedpersons (Diabetes Educators). The correct answers were marked as aware andincorrect as unaware, and made conversions to percentage. Total 561 diabeticpatients were assessed. The data was analyzed using SPSS v.16 software andexcel 2007.

Results: The level of awareness regarding diabetes and its management wasfound inadequate. Amongst, 36.3% male and 13% female diabetics were awarethat why glycemic control is important, 63% male and 32.4% females wereaware that diabetes could produce some complications. Similarly 23.7% maleand 10% female respondents know importance of blood glucose monitoring.Only 181 male and 31 female diabetics were aware of hypoglycemia symptomsand management. Over all level of awareness in female patients as compared tomale patients was found low.

Conclusion: The overall level of awareness in both male and female diabeticswas found low; and comparatively female patients have poorer awareness.