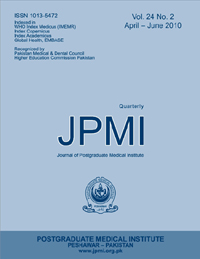 gastric varices but with exceptionally high rate of complications.

ulceration was the most common complication (64%) followed by pyrexia (28%), Retrosternal/epigastric

This descriptive study was conducted in the department of Gastroenterology,

with portal hypertension fulfilling the inclusion criteria and consenting were included in the study.

Endoscopy was arranged within 12 hours of admission to the hospital. The gastric varices were injected

with 5-10 ml of absolute alcohol depending upon the size of the varices. Both intravariceal and

The outcomes assessed were variceal eradication, rebleed and death. Findings were noted and entered into