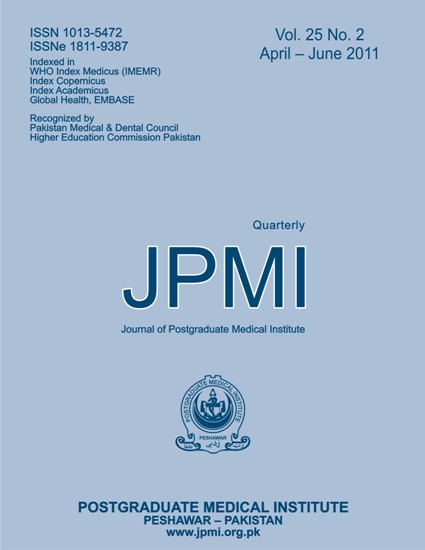 Objective: To find out the electrocardiograhic abnormalities in the normal population.

Methodology: The study was conducted by Cardiology Department, Lady Reading Hospital, Peshawar between January 2008 and January 2009. Individuals with different age, sex, professions and socioeconomical classes were randomly selected from the general population of Peshawar. Individuals with a history of Coronary artery disease(CAD),diabetes mellitis (DM), hypertension (HTN) and known dyslipidemia were excluded from the study.

Results: A total of 1825 people were included in the study. A total of 307 people suffering from coronary artery disease, hypertension, diabetes mellitus, peripheral arterial disease were excluded from the study. The remaining 1518 people were included in the study. The mean age was 36.13 ± 12.38. There were 81 % males and 19% females. ECG abnormalities were noted in 74 (4.87 %) people with 8 (2.88%) females and 66 (5.48%) males. Among females the most common ECG abnormalities were ST depression and T-wave changes while in males, it was Left Ventricular Hypertrophy, followed by the detection of an old MI of which they had no recollection. Sinus bradycardia and tachycardia was also seen in a number of male subjects. Total of 1444 study subjects were labeled as normal, among whom 891 (61.8 %) were less than 40 years of age and 550 (38.2%) were above 40 years of age.

Conclusion: ECG abnormalities are not uncommon in our normal population. ECG is an easily available and cost effective tool for screening cardiac abnormalities.