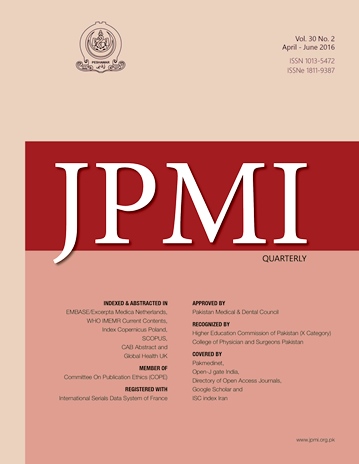 Objective: To assess polio immunization coverage, awareness about polio & its vaccination and to find reasons of polio vaccination refusals in districts Swat and Shangla (the two conflict affected areas in recent past). Methodology: This Cross-sectional descriptive study was carried out in Swat and Shangla districts, KPK, from January to July 2014. It was a door to door survey of 800 families selected by random sampling from four different localities of these two districts. Information gathered included educational status of both parents, number of children less than 5 years, polio vaccination history (both routine immunization and house to house approach) complete polio vaccination history, polio awareness level of parents and reasons of refusals to polio vaccination. Data collected was analyzed with SPSS version 21. Chisquare test was used to ascertain the association between various categorical variables and p value less than 0.05 was considered significant. Results: There were total 1775 children in age group 0-5 years in the 800 households under study. The children, who got vaccinated against polio, were 1392 (78 %). Out of rest, 294 (16.5 %) had not been vaccinated against polio and the parents of remaining 89 (5%) children did not remember whether vaccination against polio was done or not. There was a significant association between educational status (minimum matriculate) of parents and polio vaccination (p=0.000). Conclusion: The present day situation of polio vaccination is encouraging in areas under research. Law and order situation, illiteracy and misperceptions about the vaccine should be addressed along with the capacity building of the health care staff as soon as possible through sincere coordinated efforts for complete eradication of polio by all concerned institutions.